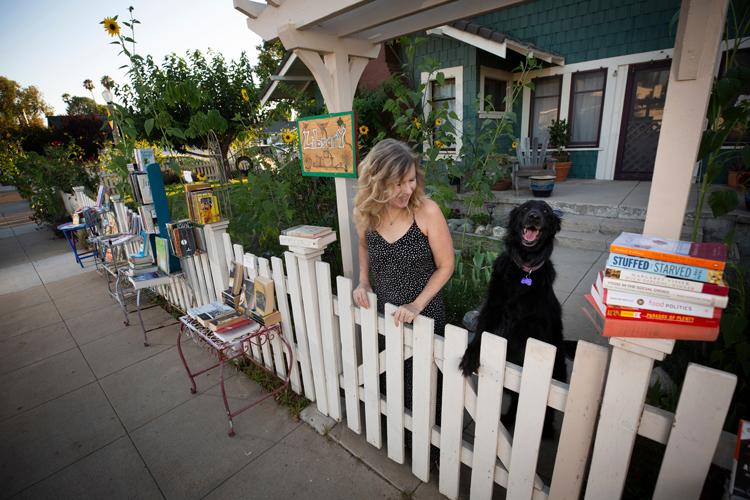 On March 17, during the first week of school closures across California, author Susan Straight was doing what she does most days — hanging out on her front porch communing with neighbors. A Riverside native, she has lived on the same bustling street corner for over 30 years, her home often serving as a gathering place for a tight-knit neighborhood. Her neighbors, many teachers at local schools and parents of small children, were at a loss as to what to do with no school, no libraries, and for many in her area, no computers or internet.

Straight, a distinguished professor of creative writing at the University of California, Riverside, describes her community as one of barter, where neighbors trade bags of oranges for tools and fresh-caught fish. She realized that day, as many fretted over the shutdown, the most valuable thing she had to offer was books — and she had hundreds.

“I had all these books in the house — there’s books everywhere,” she said. “I went to my kids’ bedroom, and there was this little wrought iron bookshelf, and I put it outside with some tiny end tables. I put kids books out the first day and a sign that said, “Free Books, Fence Library 2020.” That was the beginning of it, and then it just kind of grew and grew.”

It wasn’t long before Straight had expended her personal collection of books and had to reach out to friends to keep shelves stocked for the neighborhood kids and parents who had begun to frequent the library.

“A couple people came by and started dropping off books, and I was able to put out more books and more people saw it,” she said. “That’s when it kind of took off.”

A diverse array of books and magazines — biographies, books on gardening, copies of US Weekly and InStyle — began rolling in. Friends provided more tables and repainted bookshelves, a neighbor built an arbor and hand painted a new sign, and the fence library continued to stretch down the sidewalk now sustained by both Straight and the community it served.

Geoff Cohen, former director of CHASS F1RST: First Year Programs for the College of Humanities and Arts, and his wife Katherine Kinney, a professor of English at UCR, donated many children’s books including chapter books, science fiction novels, and books featuring children and people of color.

Alumna Carole Nagengast ’74, M.A. ‘79, whose husband Michael Kearney taught anthropology at UCR for 40 years, supplied Straight with three cartons of used kids’ books originally collected by the Riverside-Moreno Valley branch of the American Association of University Women for their children’s book project. She noted many books could not be accepted by local school districts due to the pandemic, and several more cartons have been reserved for Straight’s library once there is room.

“Aside from books I just bought from the dollar store, now it’s totally donations,” Straight said. “I was completely out of books, especially children’s books. I ran out long ago, and people like Viviane and Bryan completely saved me.”

Six months later, the fence library continues to grow in popularity. Nearby neighbors come by each day to chat and peruse, while others drive in weekly during trips to surrounding Little Free Libraries. Homeless residents come by for books late at night, and new donations appear on tables early in the morning. By Straight’s estimates, 100-150 books are gone each week along with the countless magazines snatched up as soon as they’re set out.

“What’s different about Susan’s fence library is that it’s curated,” Bradford said. “There’s an interaction with Susan, either directly or indirectly, and that feels important in a time when we must remain apart from one another. Even if you don’t know Susan, you understand that the library is someone showing her care for her community through books.”

Straight’s favorite thing has been choosing the right books for each person who comes by, noting the library has allowed her to meet some neighbors for the first time. She said it has also allowed for many deeply personal and profound conversations with passersby trading their stories for books.

“Susan is an icon in the community,” Cohen said. “She does lots of outreach at the neighborhood, community, city, county, and state level. The library is an extension of the important work she does for those who do not have. The many people who stop and pick up a book or a magazine share stories with Susan. The give and take is truly wonderful.”

Straight is the author of eight novels including “Highwire Moon” and “A Million Nightingales.” Her debut memoir, “In the Country of Women,” was selected as Barnes & Noble’s nationwide pick for memoir for September 2020 and was released in paperback on Aug. 25.