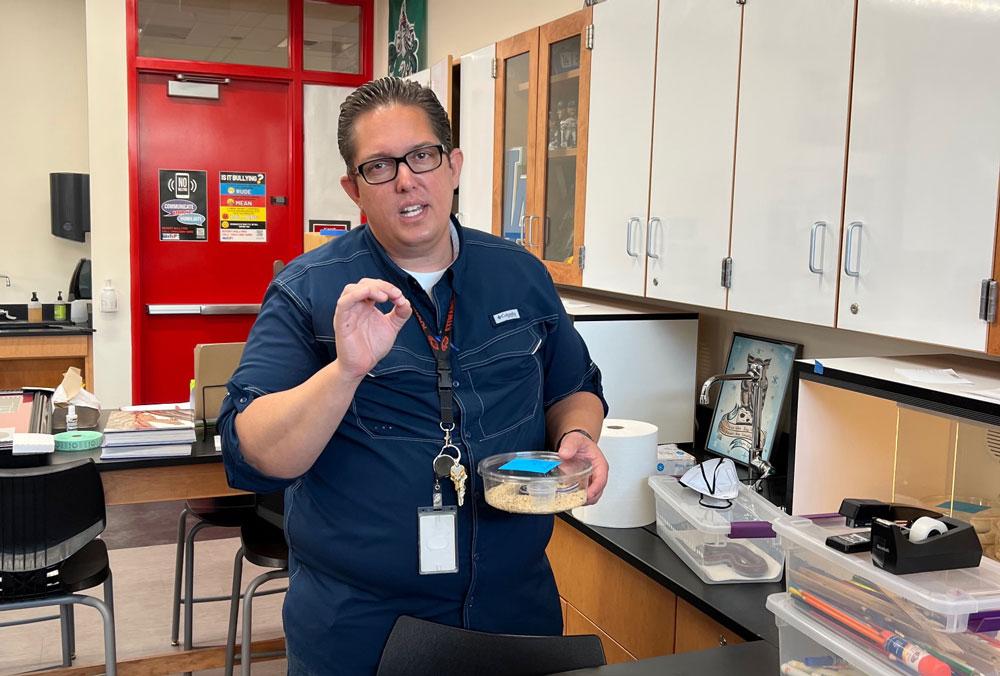 The only high school teacher among this year’s cohort of honorees, Edwards takes the award in stride. He’s more proud, he says, of the letter of recognition he received from a former student, who had moved to the U.S. from Guatemala and, in her words, was insecure about her ability to speak English.

“In measured steps, he encouraged me to participate in class discussions as well as projects and presentations,” the student wrote. “He believed in me and gently pushed me to face what I found hardest to do: speaking English in public.”

“What she wrote will fill my cup for years to come,” Edwards says.

Teaching, and inspiring students, is something the California native has thought about much of his life. His own inspirations were former teachers of his – Rocco Ferrario at Redwood Middle School and Dr. Andrea Huvard at California Lutheran University – both of whom showed him the great things that can happen when you show interest in your students.

Though his own career journey began as an environmental consultant, he was always a teacher at heart. He began doing so in 2012, and in the years since has taught different science courses while also leading the school’s Academic Decathlon team. This past February, the team won the County’s Academic Decathlon competition.

His fascination with the sciences also developed at a young age – tracking down snakes and lizards in his neighborhood. He continues to breed snakes, and has several of them living in glass terrariums along the back walls of his classroom.

“From the day he arrived, he made an impact on the campus. He has great ideas, but he also gets his hands dirty doing the work wherever there’s a need,” Wolfe said.

Edwards also epitomizes the student-centric approach that has made the Chaffey Joint Union High School District a model for 21st century education.

“It’s an honor to work with exceptional teachers such as Ryan, dedicated to preparing their students for life after high school. His Teacher of the Year award is a great honor for him and our District,” says Dr. Mathew Holton, Chaffey District Superintendent.