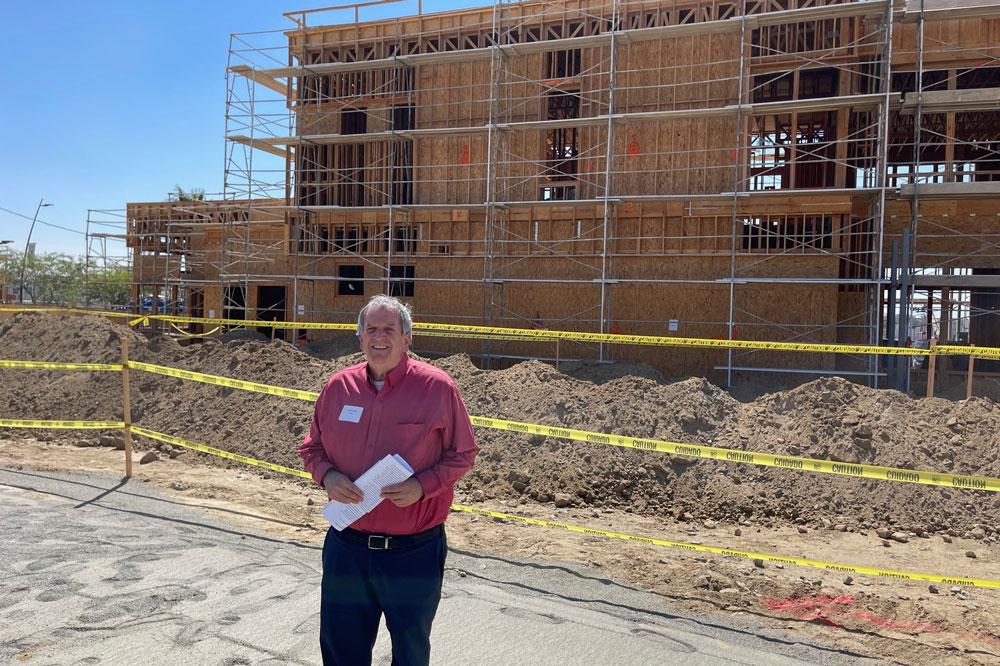 Homecoming at The Resort is one of the largest communities of its kind in Southern California, and its proximity to the Rancho Cucamonga Metrolink Station is seen as a bold step forward in 21st century community development. The groundbreaking represented the latest step forward in a bold partnership that has brought together some of the most innovative minds in community building, business development, urban planning and transportation.

“The future of California is right here, and with Homecoming, we’re offering a preview of what that future looks like,” said Randall Lewis, Executive Vice President for Lewis Management Corp., the project developer.

Initial construction has begun on the $300 million-plus project, which will feature state-of-the-art, highly energy-efficient rental homes ranging from 775-2,300 square feet, set in a walkable community near neighborhood and regional commercial centers and the new vision for Cucamonga Station in the HART District of Rancho Cucamonga.

City officials unveiled a conceptual vision of an expanded station, which has become a focal point for some of the most innovative transportation development planning anywhere. Among the projects being discussed or actively planned are an underground tunnel that would use zero-emission vehicles to transport passengers to and from Ontario International Airport; a high-speed rail to and from Las Vegas; the Arrow line extending from Redlands to Los Angeles and featuring zero-emission passenger trains; and the West Valley Connector, a zero-emission bus rapid-transit system that in recent months has secured more than $110 million in federal funding.

Homecoming and the Cucamonga Station expansion will serve as a critical gateway to the Inland Empire, which itself is fast becoming Southern California’s hottest population and economic center. Now home to 4.7 million people, San Bernardino and Riverside counties are expected to exceed 6 million within 25 years, according to the Southern California Association of Governments (SCAG). That makes the IE the fastest-growing subregion in Southern California and one of the most robust in the country — attracting businesses and high-quality jobs in record numbers. By 2045, the working-age population in the Inland Empire is expected to grow by an astonishing 85%, according to SCAG.

“We firmly believe this is the best location in all of Southern California, and are eager to see all of these pieces come together in what will be a new model for living, working and playing,” said Rancho Cucamonga City Councilmember Kristine Scott, whose district includes the Homecoming.

PHOTO: Developer Randall Lewis at Homecoming at The Resort