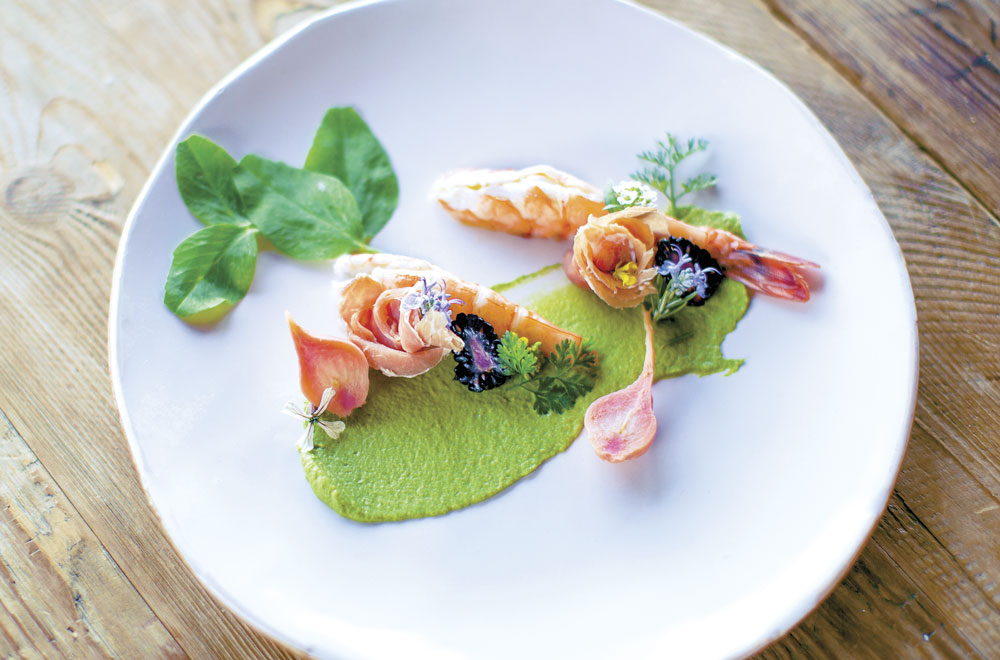 Cork Fire Kitchen at the Temecula Creek Inn is more than a rest stop after a round of golf on the property’s 27-hole championship course. Headed by executive chef Matt Steffen, the rustically elegant restaurant serves sophisticated, but approachable brunch and dinner dishes that range from salads to desserts.

“The atmosphere is upscale, but not pretentious,” says Steffen, noting that families as well as couples celebrating first dates or special occasions are equally comfortable.

Enjoy your meal from the dining room or settle in on the outdoor patio that overlooks the golf course.

The menu changes seasonally, says Steffen, who uses the bounty of the .25-acre on-site garden in many dishes and in the restaurant’s signature cocktails.

Heartier appetites have plenty to choose from, like the Bistro Steak, which Steffen says is a crowd favorite. The tender, eight-ounce steak is served with a crispy marble potato, chimichurri sauce, asparagus and chives.

Pair your meal with one of several signature cocktails, like Tequila Negroni, or choose from one of the many wines or beers available.

For dessert, bite into the delectable Flourless Chocolate Ganache Cake, among other options.

Cork Fire Kitchen partners with several Temecula wineries to offer evening garden wine dinners. The next one is March 11 featuring wines from Danza del Sol. Steffen and his team prepare dishes to go with each varietal offered at the dinner. Contact the restaurant for details.

Steffen says dinner service on weekends at Cork Fire Kitchen gets a bit busy; however, a reservation online or via phone to the main restaurant line “can usually score you a prime seating table for that evening.” 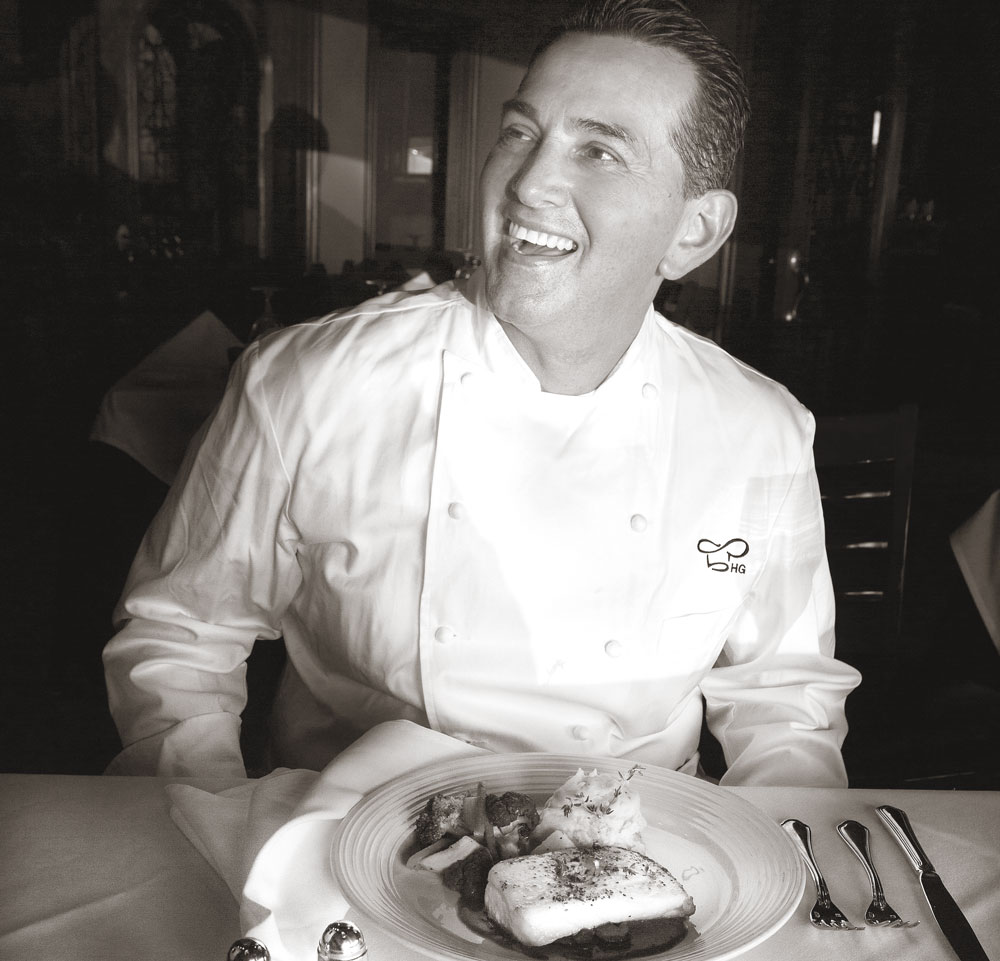 Master of the Kitchen

For more than 20 years, Spaggi’s has transported patrons from its strip mall location in Upland to a charming café setting like you would find in Italy. Beautiful paintings and cozy tables draped with white linen create an elegant atmosphere for enjoying fine Italian cuisine.

Owner and Executive Chef Henry Gonzalez has a reputation for being both personable with his patrons and innovative with his menu, creating dishes that please both the eye and palate. His skills have been a lifetime in the making.

At 9, he washed dishes in the restaurant where his father worked as a chef. In order to do so, he had to go to church and keep his grades up, but that was no problem. He loved being in the kitchen. And he did more than just wash dishes: he watched, observed and tried his hand at a few tricks of the trade, including knife skills. Once he fainted after cutting himself, but didn’t tell his father. When Dad found out, he asked Henry why he hadn’t told him. Henry said he was afraid he wouldn’t be allowed to work there anymore. His father then understood how much Henry wanted to work in the restaurant industry.

Those youthful ambitions didn’t fade. At 16, Henry went to work at Rosa’s Restaurant in Baldwin Park and eventually moved to its Ontario location. He attended the Los Angeles Culinary Institute and later gained experience at other restaurants, including Melvyn’s in Palm Springs, where patrons included Frank Sinatra and Dean Martin.

Henry eventually landed at Wolfe’s Market kitchen in Claremont, then in 2002 he became co-owner of Spaggi’s; in 2009 he assumed full ownership. He runs the restaurant with his wife, Ana, and a team of chefs.

The recipient of numerous culinary awards, Chef Henry is one of the Inland Empire’s most highly acclaimed chefs.

On a recent visit we sampled several items, starting with Linguini Pesto Pomodoro. This dish features Barilla pasta imported from Italy topped with fresh organic Roma tomatoes, puréed basil, pesto sauce, imported Parmesan cheese and pecorino cheese. The al dente pasta is tossed in extra-virgin olive oil and cream, and garnished with toasted pine nuts and a tomato rosette. Perfectly seasoned, the pesto was present but not overpowering. The rich, fresh tomatoes and sauce on the side of the noodles can be scooped up and savored like tomato soup.

The flavorful Sand Dabs can be enjoyed as an appetizer or main dish. The small, buttery fillets are dipped in egg and sautéed in Asiago cheese, garlic, white wine, lemon and capers. As a main dish they are served with a side of vegetables and potatoes.

The Chilean Sea Bass has a distinctive twist. Chef Henry says he uses the center loin of the bass so it is cut in a “nice medallion style.” The fresh fillet is delicate and tender. What separates this refined fish selection from others is the sauce: balsamic vinegar with red wine, caramelized Maui onions, sun-dried tomatoes, and a mix of shiitake and porcini mushrooms. Fresh, colorful vegetables and mashed potatoes are served on the side.

Beef enthusiasts will appreciate the signature steak, a 16-ounce prime, dry-aged rib eye. “We felt we needed to have the best quality steak to have the best tasting steak, so we invested in that and a broiler that cooks at 1,600°F to produce a steakhouse-tasting steak,” Chef Henry says. The meat is tender and lightly seasoned, and is served with a Chianti red wine sauce on the side. Fresh vegetables and au gratin potato, which is shaped to resemble a rose, accompany this dish.

Henry and Ana support numerous charitable causes in the region, and their sense of community is visible on the menu. Three heart-healthy dishes are named for local hospitals. For example, the Casa Colina features broiled salmon served on fresh uncooked spinach, bruschetta and goat cheese and is surrounded with toasted bread points.

The end-all is the Pineapple Upside-Down Cake with Tahitian vanilla ice cream. Refreshing, sweet and very light, the cake is large enough for sharing.

Arrangements can be made for private lunches and dinners. Private and semi-private rooms are separated by glass doors. Catering is also available. 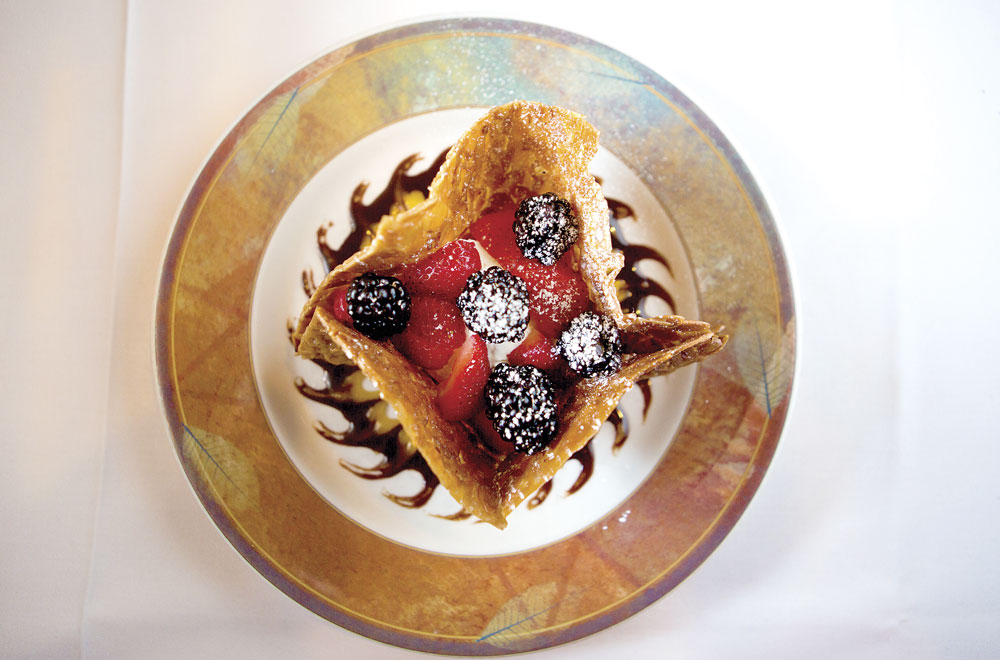 For three decades, Italian food in Ontario has been defined by Rossa’s Cucina Enoteca, formerly known as Rosa’s. A recent visit confirmed that while the decor was updated a few years ago, the cuisine continues to reflect the traditional tastes of the Old Country. All sauces, pasta and desserts are made in-house.

Meat dishes hold their own here as well. The Osso Buco dello Chef offers a moist and tender roast veal shank, braised in a blend of fresh tomato sauce and Marsala wine and plated over fresh asparagus. A marrow-filled bone holds pride of place at the center of the plate, with a side of fettuccine noodles dotted with perfectly cooked green beans and peas.

For a beefier choice, try the Bistecca alla Griglia, aged New York steak nicely grilled and served on a bed of juicy mushrooms infused with a brandy peppercorn sauce.

Those who prefer meat-free dishes have several choices, including Ravioli della Casa: large spinach and ricotta-filled ravioli in a porcini mushroom cream sauce. Or try the Penne Arrabiata: penne pasta with a spicy marinara sauce, olives and capers.

Pair it all with a glass of wine, such as the full-bodied 2016 Coppola Claret Cabernet we enjoyed. Lighter fare is also available with a selection of salads, chicken preparations and vegetarian pastas. 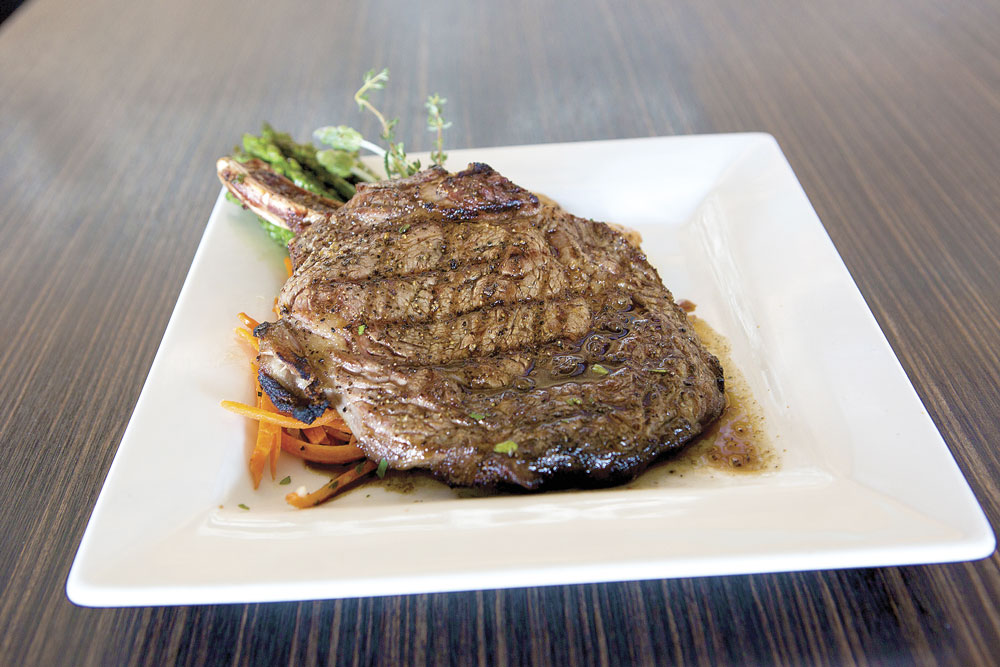 Luke’s On Front boasts an evolving menu and a fine view.

Fresh seafood and fine cuts of meat are the focus at Luke’s on Front in Temecula. Owners Kelly and Chris Cusack are always changing things up, and under the steady and adventurous hand of Chef Esaun Torres, you’re in for constantly evolving dishes on the menu. An added attraction is that they’re located on the top floor of a building which has outdoor in addition to indoor seating, offering a fine view of Old Town and the Temecula Valley.

We began with a seared ahi tartare taco topped with wasabi-infused cream cheese and Thai chili sauce in a crispy rice shell garnished with sliced avocado and streaks of wasabi and Sriracha-like sauce. Don’t try to pick up the whole thing. When it inevitably soaks up some of the liquid, it will fall apart in your hands. Eat the contents with a fork and enjoy the boldly flavored tuna cubes.

The seafood parade continues in the form of a beautifully grilled (or blackened) eight-ounce fillet of wild-caught Atlantic salmon drizzled with a lemon caper sauce. This dish is melt-in-your-mouth goodness accompanied by white jasmine rice and organic roasted broccoli. Striking flavors, and it’s healthy to boot!

Best of all was the seafood pasta. The linguine was tossed with an abundance of scallops, shrimp, clams in their shells and a modicum of shredded crab meat, in a beautifully rendered sauce consisting of a vodka sour cream sauce, clam juice and some blackening spices which impart a slight orange hue. The shrimp had a pleasant snap and the scallops were large and melt-in-your-mouth tender. Ask for a spoon to devour every last drop of the scintillating sauce.

If you fancy a burger, Chris’ Twisted Savage is the way to go. A half-pound grass-fed patty is dressed with grilled jalapeño, hickory smoked bacon, pepper- jack cheese and chipotle aioli and served on a toasted pretzel bun. There’s a lot of heat without overwhelming the smoky, high quality of the meat.

If you love lamb (which goes perfectly with a bottle of Syrah), the sliced Australian rack of lamb served in a black fig demi-glace accompanied by fingerling potatoes is for you. Five succulent chops are cooked in a reduced red wine beef stock with shallots, garlic and herbs. Nibble the meat from the bone at a slow pace to make the chop last.

The prime bone-in 16-ounce ribeye served with a green peppercorn demi-glace and au gratin potatoes and fresh asparagus is also a winner. Chef Esaun knows his way around steaks, and this one was a thing of beauty, tasting like it had been cooked over an open wood fire rather than grilled. It was succulent, highly aromatic and nicely charred, not to mention perfectly medium rare plus as ordered.

Dessert consisted of a slice of chocolate ganache cheesecake topped with a strawberry coulis and dollops of house- made creme Anglaise with meringue garnishes. A fitting conclusion to a parade of highly enjoyable dishes. 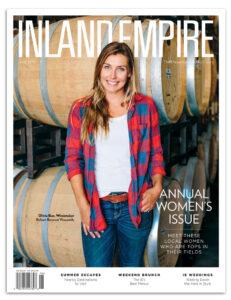