Rock and Roll Hall of Famer Buddy Guy has captivated audiences for more than six decades with his iconic Chicago blues style that combines classic and contemporary forms. The multi-Grammy Award winner calls himself “a caretaker of the blues” — referring to his commitment to progressing the genre while maintaining its traditional roots. He comes to The Canyon Montclair (Montclair Place, 5060 E. Montclair Plaza) on Wednesday, March 11. Doors open 6 p.m., show at 9 p.m. Tickets $68–$158. www.wheremusicmeetsthesoul.com

The No. 1-selling duo in music history—Daryl Hall and John Oates—is returning to the Inland Empire this spring. From the mid-1970s to the mid-’80s, Hall and Oates scored six No. 1 singles: “Rich Girl,” “Kiss on My List,” “Private Eyes,” “I Can’t Go For That (No Can Do),” “Maneater” and “Out of Touch” from six consecutive multi-platinum albums. March 21, Fantasy Springs Resort Casino. 8 p.m. Tickets start at $79. fantasyspringsresort.com

Singer, songwriter, actor, author, philanthropist, entrepreneur and activist, Chaka Khan has influenced generations of music creators during her four decades as an artist. A 10-time Grammy Award winner, she has released 22 albums and racked up ten number one songs on the Billboard charts, seven RIAA-certified gold singles and ten RIAA-certified gold and platinum albums. Fans can hear her perform at Pechanga Resort Casino in Temecula on Saturday, March 28, at 8 p.m. Tickets start at $89 and can be purchased at the Pechanga Box Office, by calling 1-888-810-8871 or online at pechanga.com.

Actor Rob Lowe found success with his two memoirs, Stories I Only Tell My Friends and Love Life. He developed a one-man show, “Stories I Only Tell My Friends,” which he presents at Morongo Casino Resort Spa in Cabazon on March 27 at 9 p.m. Lowe dishes on his acting career as a member of the “Brat Pack,” and his film and TV roles. Besides work, Lowe discusses marriage, fatherhood, fame and fun with friends. Tickets $59 to $79. morongocasinoresort.com 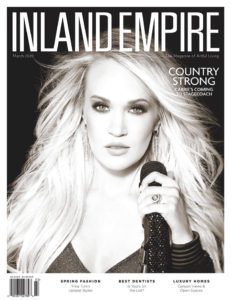